A little less than a year ago, I stumbled upon a submission for NPR’s Tiny Desk Contest series that featured seven guys playing seven instruments in a very cramped (but trendy) room, and of course, in front of a very tiny desk. They sang a buoyant song called “State Line” that immediately hooked me in, with effortless balance of percussion, brass and silky vocals. It was then that I discovered the soulful and groovy, The Dip. Based in Seattle, this collective skillfully blends soul, funk, R&B and pop into their own distinct sound.

The Dip features musicians from Beat Connection and The Honeynut Horns, both native to the Pacific Northwest music scene. In total, there are seven musicians who make up the entirety of this band: Tom Eddy (vocals and guitar), Jarred Katz (drums) Mark Hunter (bass guitar), Jacob Lundgren (guitar), Brennan Carter (trumpet), Levi Gillis (tenor saxophone) and Evan Smith (baritone saxophone). The PNW soul scene is not nonexistent, but it is quite small, so I was *jazzed* to hear the smooth sounds reminiscent of the classics we know and love here in our very own backyard.

Along with playing at Sasquatch and High Sierra Music Festival this year, they recently just got back from their coastal tour (of which some of the dates were in support of Pickwick). Capitol Hill Block Party will be the last stop on their 2016 summer tour, and I have no doubt it’s going to be a kicker. I got the chance to chat with Evan before they all hit the stage on Friday.

KXSU: So, what’s the story behind The Dip? How did you all meet?
THE DIP: We all met at the UW and a lot of us were involved with the jazz department in some way.  I joined a little bit later, after just moving to Seattle, and at the time the rhythm section was already playing in a group with a different name that was geared toward house parties.  We put together a horn section with the same instrumentation as the Dap Kings (of Sharon Jones’ fame) and started jamming at the UW Music Building mainly.  We wrote a few of our own songs, learned some covers, and started out playing house shows around the U-District.  Most people that were going to those parties were used to DJ sets, and certainly were surprised when like seven or eight people rolled in to play music!  After we had a few tunes together, we recorded an EP in our guitar player’s basement, and did a release show at Barboza that went pretty well.  From there, it’s been just a slow steady rise as we write more songs and play more shows! 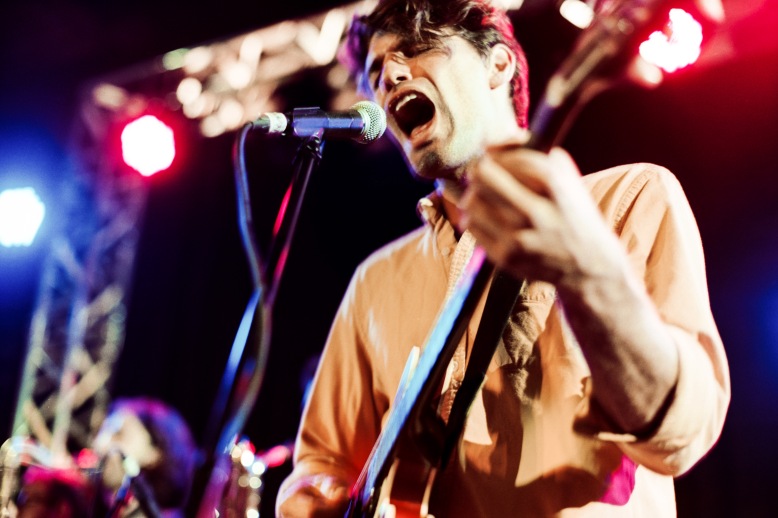 Photo Courtesy of The Dip

KXSU: Who are some of the artists you are listening to at the moment?
THE DIP:  We’re pretty eclectic in terms of our band listening tastes.  Artists in the Dap-Tone sphere have been supremely influential to us: Sharon Jones, Saun and Starr, Menahan Street Band, Budos Band, and more. Also modern soul artists like Charles Bradley and Lee Fields.  Looking backward, we’ve listened to a lot of Al Green, James Brown, Bill Withers – stuff you’d expect.  I’ve been really into Clarence Carter on the soul side lately as well. The band has a pretty strong jazz lineage as well, and most of us play in jazz groups away from The Dip. So, we listen to a lot of stuff ranging from Chet Baker to Sun Ra and beyond.

KXSU: You recently went on your 2016 Summer Tour! Can you tell us a little more about it? How was life on the road?
THE DIP:  The tour was great!  We played some venues that we’ve hit before, as well as trying to break into some different markets.  We played at the historic Boom Boom Room in San Francisco for the third time; and, the club was packed most of the night.  We had to play 2.5 hours there, which is pushing it for our band, but we were able to stretch out and solo.  We played at the High Sierra Music Festival in Quincy, CA, which was an awesome experience and atmosphere.  We got to check out some awesome sets by Femi Kuti and the Tedeschi Trucks Band.  We did back-to-back nights in Bellingham and had a few thousand people there to listen to us at an outdoor concert downtown, and got to play with a local group, Pickwick, that we admire a lot!

Our drummer, Jarred, pretty much single-handedly planned this tour and did a great job in getting us some good shows and making sure we didn’t kill ourselves traveling.  We took three days off in SF on Sunday-Tuesday when live music generally doesn’t do as well; so, we were all able to recuperate and enjoy the city.  We don’t have a band-van per se, but rented a nice 12-person van this time to ride in comfort instead of piling into an SUV with all our gear like we did on our first tour.

KXSU: What do you think is the best and worst thing about being in a seven-piece band?
THE DIP: Musically, being in a bigger band allows everyone to focus specifically on one role and do it really well.  We are also able to fine-tune arrangements with lots of different textures, densities, and details by adding and subtracting instrumentation at any point in a given tune.  Logistically, having so many people keeps the day-to-day business side manageable as we all split up the responsibilities of booking, finance, merchandise, etc.  We also have a great sense of community when we all get together, and are probably one of the best cooking and eating bands around!

The down side is definitely the scheduling!  We all have other projects in addition to The Dip, and finding times we can all get together is very challenging at times.

KXSU: Your new EP, Won’t Be Coming Back, was released earlier this year. Can you tell us a little bit more about what inspired you with this new album? 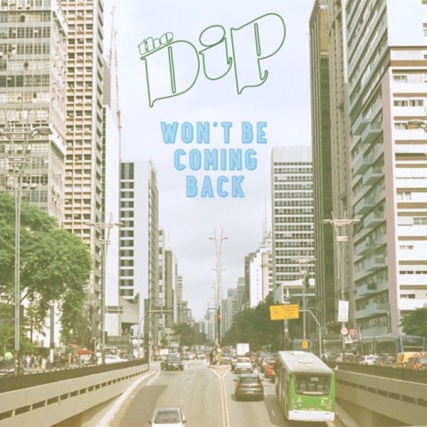 Photo Courtesy of The Dip’s Bandcamp

THE DIP:  Won’t Be Coming Back was born out of some instrumental songs that we had worked up and had been playing on our live shows.  We probably have equal number instrumental and vocal tunes, which we like to deploy to control the ebb and flow of our live set and give Tom a break from singing constantly during our longer sets.  We’ve been working on new stuff for an upcoming LP that will be mostly vocal numbers; so, we decided to release four of the instrumental tracks as their own EP.  We also really wanted to explore some crunchy, grittier sounds and recorded the tracks to an old 4-track tape machine that Jacob had.  He’s a pretty incredibly engineer in his own right, and he’s got some really great sounds!  We recorded the rhythm section in one day at our studio, and then added the horns in two sessions in a couple living rooms – nothing fancy!  Since we didn’t have many inputs, all three horns had to record at the same time; and, we had adjust how far away from the microphone we were and then mark the spot with tape so we could get the same levels.  The EP will be coming out on 10” vinyl this fall, with a 7” coming from Colemine Records after.

KXSU: If Won’t Be Coming Back was the soundtrack to one movie, what would you want that movie to be?
THE DIP:  That’s tough – I haven’t watched many movies lately!  The title definitely invokes travel; and, the album cover is a shot from Sao Paolo, Brazil that our trumpet player, Brennan, took while out on the road with Odesza.  So, I’ll cop out and just say anything that’s an epic travelogue.

KXSU: Can you describe your idea of the best show ever?
THE DIP: Our favorite shows are definitely the ones where the crowd is moving – so that’s the number one priority for any ideal show!  It doesn’t really matter how big the crowd is – if we are feeling energy from the audience it usually spurs us on to improvise and explore our compositions.  Finding new things to do in the songs that we’ve played a lot of times is always great.  Having good sound and some good food and drink beforehand sure goes a long way toward getting us all into the right mindset…

KXSU: Since all of your songs are soulful, funky, and smooth, what is the one song you folks love to play live the most?
THE DIP: We’ve really been enjoying playing the new EP material, as well as some of the newer tunes that we’ll be recording for the upcoming full-length.  We’ll close out set at CHBP with a new song called “Sure Don’t Miss You” that usually gets everyone moving – that’s been a favorite lately. 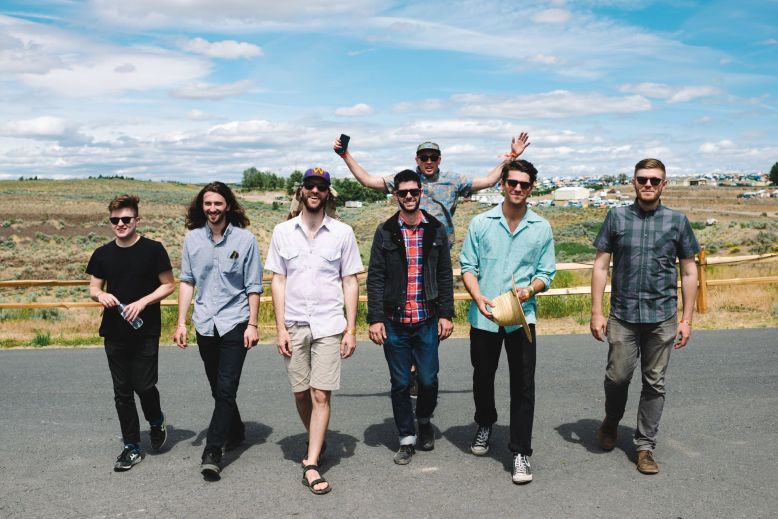 KXSU: Who is someone you would love to see in your audience one day?
THE DIP: Let’s aim high here: Barack Obama.

KXSU: Who are some artists & bands you plan on seeing at Capitol Hill Block Party?
THE DIP: I’m personally always wholly unprepared when it comes to knowing the schedules for music festivals and usually just end up meandering around to see where the day takes me.  I know I’d like to see Porter Ray; and, we’ve got a couple people in our band playing with Odesza, so I’m sure the rest of us will be there!  The horns are playing with our friends in the band Sundog after our set on Friday as well; so, we’re pulling triple-duty at this year’s festival.

KXSU: As I’m sure you folks are very familiar with CHBP, can you share some of your festival do’s and don’ts with us?
THE DIP:  CHBP is so unique in terms of music festivals because of its location in an urban hub – very different than driving out somewhere and camping…
Do: Dance! Wear sunscreen, drink some water, take the light rail or plan for surge pricing…
Don’t: Just hang out at the main stage – go see some the local acts throughout the day, too!

So, regardless of how you see their band name—as the partner in crime of your Juanitas chips or the act of going into a body of water—just say yes and go for it. See The Dip kick off the music at the Main Stage at 4 p.m. on Friday, July 22. It’s about to be a damn good show.

One thought on “Take The Dip at CHBP 2016: An Interview With Seattle’s Soulful Collective”